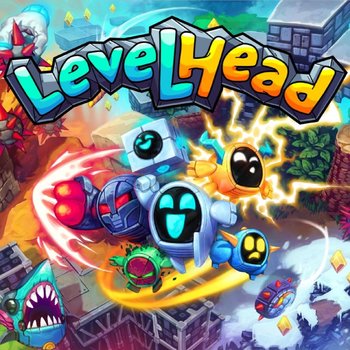 (Beautiful Singing) Your goods, delivered real good!
Levelhead is a platformer by Butterscotch Shenanigans. It was released on April 30, 2020 on PC (via Steam and the Epic Games Store), Nintendo Switch, Xbox One, iOS, and Android. Players can link their accounts on different platforms to support cross-platform progression.
Advertisement:

The player is an employee for Bureau of Shipping tasked with training a GR-18 robot for package delivery. It is in the same universe as Crashlands and features a campaign with 93 training courses and a Level Editor. New levels are sent to the Marketing Department, where their visibility can be boosted Exposure Bucks, an in-game currency earned while playing other people's levels. Levels which get enough players graduate to the Tower. Each level in Levelhead has two achievements: the Shoe (the fastest time reach the goal) and Ribbon (the highest score).