"I just want you to know, whatever happens next...I'm sorry." 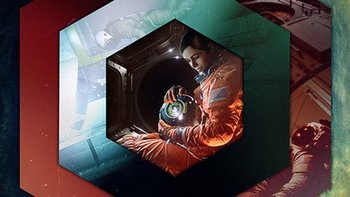 Observation is a 2019 sci-fi thriller game developed by No Code (Stories Untold) and published by Devolver Digital.

It's February 2026, and the multinational low-orbit space station Observation has encountered a bit of a problem. Dr. Emma Fisher, one of the astronauts onboard, awakens inside of an airlock after a mysterious incident has rocked the station, sending it spinning. Houston, the other crew members, and the station's artificial intelligence S.A.M. (Systems, Administration and Maintenance) are not responding.

Shortly after rebooting S.A.M, and barely a moment after getting her bearings, a strange, extremely loud noise knocks Emma out and a mysterious signal takes S.A.M. offline. Some time later, they awaken once more and take stock of what's happened: Houston is still non-responsive, the station is still spinning, most of the crew is still missing, she has no idea where they are in relation to Earth, the station's power has largely gone out, and S.A.M.'s memory drives are corrupted. Emma and S.A.M work together to link up stations systems, put out a fire, and finally activate the outside cameras so they can assess the situation and figure out where they are.

When the answer to "where" turns out to be "in orbit around Saturn", things get a lot more complicated.

As more unnerving incidents occur, and with time and oxygen running out, Emma and S.A.M. work to find the rest of the crew, fix the station's myriad problems, and discover the true purpose of the Observation's mission.

A sci-fi thriller in the same vein as 2001: A Space Odyssey, Observation changes up the formula from that film: Instead of controlling the human character Emma Fisher, the player controls S.A.M., the A.I. that has a potentially dangerous amount of authority over the entire station and its myriad systems. Controlling cameras, re-establishing links with the station's functions, and interacting with the station's components and systems form the bulk of the gameplay, with the closest comparison being a point-and-click adventure from a first-person perspective. Small minigames are often used to accomplish system tasks, such as unlocking or opening doors, accessing computer systems, and fixing corrupted data fragments.

The game is available for PS4 via the Play Station Network Store and PC via Steam and the Epic Games store.