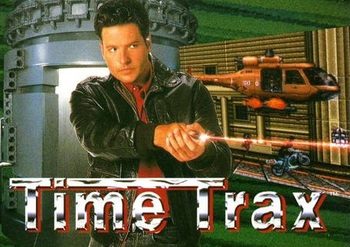 Time Trax (1993-1994) was a television series, an American-Australian co-production.

Time Travel is invented in the last decade of the 22nd century, and its inventor, Doctor Mordicai "Mo" Sahmbi, uses it to help criminals escape justice by sending them back 200 years in time. When Sahmbi uses it himself, police Captain Darien Lambert volunteers to go into the past himself, capture the fugitives and return them to the 22nd century to pay for their crimes.

As a more evolved 22nd-century human, Lambert is in better-than-peak physical condition, and possesses a special ability called Time Stalling which allows him to react much faster to his environment. He also has access to advanced technology, like a MPPT (Micro Pellet Projection Tube; to all practical effects a stun ray) disguised as a car alarm, and SELMA (Specified Encapsulated Limitless Memory Archive), an artificially intelligent supercomputer the size of a credit card, capable of projecting a holographic avatar in order to better depart and quarrel with Lambert.

The main Phlebotinum of the series are TXP, a drug which allows the "molecular alignment" required for time travel, and TRAX, the time machine which makes time travel possible. (Lambert's MPPT can project pellets loaded with TXP.)

The Time Travel treatment in the series was inconsistent. Captain Lambert, fearing the possible consequences of altering the timeline, did not actively attempt to interfere with the flow of history known to him, although he frequently left messages for his colleagues in 2193 (via the 'personals' sections of a newspaper). However, the series made a couple allusions to a theory of parallel timelines to try (not very successfully) to evade the issue of temporal paradox, implying that the time travellers went into an alternate past so that their actions there had no effect on the 2193 "present." (This would prevent the newspapers ads from being read in the future, however...) This inconsistency affected the selected method for retrieving fugitives also; after they received a projected pellet, sometimes Lambert published an ad requesting the retrieval, but most of the time SELMA would emit a "transmission tone" which somehow was detected by TRAX and triggered the time travel of the fugitive.

The series contained examples of: