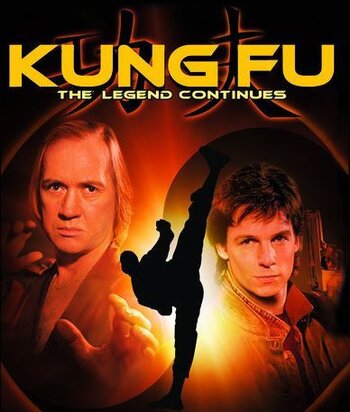 Kung Fu: The Legend Continues was a Sequel Series to Kung Fu (1972) that aired from 1993 to 1997. It ignores the events of the original sequel, Kung Fu: The Next Generation.

Kwai Chang Caine (David Carradine) is the Identical Grandson to his namesake, the protagonist of the original series. He is a Shaolin priest working in a temple in California with his teenage son Peter (Nathaniel Moreau, later Robert Bednarski as a child, Chris Potter as an adult). When a renegade priest burns the temple down, father and son are separated, each believing the other had perished, and thus go their separate ways. Caine wanders the country, while Peter winds up with a foster family, and follows his foster father into police work, largely forgetting his Shaolin training. 15 years later, Caine comes to the town where Peter works and is finally reunited with his son. Caine settles in the Chinatown district and uses his wisdom and martial arts skills to assist Peter in his various cases.