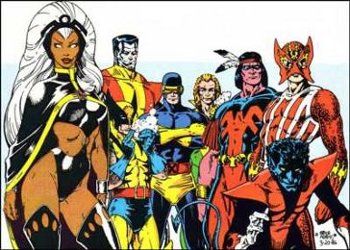 Uncanny X-Men is a comic book series starring the Marvel Comics superhero team, the X-Men. It is the longest running X-Men comic book series, and by far the most prominent. The title was first published in 1963 and is almost always considered the flagship X-Men comic. Although originally simply titled The X-Men, the entire series is often referred to as Uncanny X-Men for convenience's sake.

The X-Men was the original title for the X-Men launched by Stan Lee and Jack Kirby. Under growing anti-mutant sentiment, Professor Charles Xavier creates a safe haven for the growing mutant population and he recruits five young adults for a super-hero team, named the X-Men (for "extra power" or the X-Gene, which causes mutant evolution). The first volume of the book featured the five mutant heroes Cyclops, Beast, Angel, Iceman, and Jean Grey (originally Marvel Girl) as they battled not only villains, but increasing prejudice against mutants. This also marked the first appearance of longtime X-Men foe Magneto and the Brotherhood of Evil Mutants. The title never caught on with readers at the time; most readers thought the book was a poor Fantastic Four knockoff. Despite bringing in new characters such as Cyclops's brother Havok and Polaris (another of Magneto's children) and crossovers with The Avengers, sales still slumped. The title ran until issue #66 before being effectively canceled; the title continued on, publishing reprints of old stories.

In 1975, the series was uncancelled after Giant-Size X-Men #1 introduced a new and more diverse team: now billing itself as All-New All-Different X-Men, new stories resumed with issue #94 featuring the new characters Storm, Colossus, Banshee, Nightcrawler, Thunderbird (briefly) and Wolverine, retaining only Professor X and Cyclops (and later Jean Grey, who would become Phoenix). Chris Claremont took over writing duties, with Dave Cockrum and later John Byrne as artists/co-plotters. This was when X-Men finally hit its stride and became a bonafide smash, with credit due to the new creative team and a number of memorable storylines such as the "The Dark Phoenix Saga" and "Days of Future Past". From issue #114 the series billed itself as Uncanny X-Men, though the official title wouldn't add the adjective until issue #142.

Claremont had an extremely long run as writer, lasting until 1991, and codified much of what defines the X-Men in the modern age. After Byrne left the book Claremont worked with a succession of regular artists including Cockrum again, Paul Smith, John Romita Jr., Marc Silvestri and Jim Lee (who would become co-plotter). The team would continue to evolve as well, as some characters left and new characters were introduced, including Kitty Pryde, Rogue and Rachel Summers; Magneto also made a Heel–Face Turn and took over leadership of the X-Men. The Mutant Massacre story prompted a huge shift in the team lineup with only Storm, Wolverine and Rogue remaining, while bringing in new members Psylocke, Longshot, Dazzler and a returning Havok. Later additions to the team included Jubilee (Marvel Comics), Gambit and long-time recurring character Forge.

After Claremont left, around the same time as the launch of the companion series X-Men vol. 2 (nicknamed "Adjectiveless X-Men"), Jim Lee continued as co-plotter along with new artist Whilce Portacio until both departed to co-found Image Comics. Afterwards, writing duties passed to Scott Lobdell, who would become arguably the most prominent creative force on the X-Men books for much of the 1990s. During this period, the X-Men were split into two field teams with Uncanny X-Men featuring the "Gold Team" (while X-Men featured the "Blue Team") – this lasted until the Age of Apocalypse event in 1995, after which the two titles began blending together. After Lobdell's departure he was followed as writer by Steve Skeates, and then by Alan Davis with Terry Kavanagh. In 2000 the X-Men: Revolution relaunch saw Claremont briefly return as writer.

In 2001, Uncanny X-Men became a secondary X-Men title as Grant Morrison's New X-Men replaced it as the flagship, written by Joe Casey and then Chuck Austen. The X-Men: ReLoad relaunch in 2004 then saw Austen shifted over to the adjectiveless title while Claremont once again returned as the writer of Uncanny X-Men, carrying over stories and characters from his X-Treme X-Men title.

Ed Brubaker became the new writer of Uncanny X-Men in 2008. After the Messiah CompleX crossover event he was succeeded by Matt Fraction who in turn was eventually succeeded by Kieron Gillen. The original volume of Uncanny X-Men was ended with issue #544 in 2011 after the crossover event Schism – it was immediately relaunched as Uncanny X-Men (2011), also written by Gillen. The series has been relaunched from #1 a number of times since; the third volume brought back original numbering for its final issue, ending at #600.

Major Storylines in Volume One:

The first volume provides examples of the following tropes: