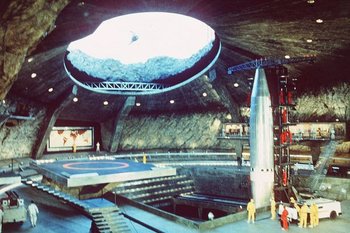 To maintain Plausible Deniability and hide from magical TV Spy Satellites, any sufficiently powerful or advanced covert organization of heroes, villains, conspirators, or military personnel needs an Elaborate Underground Base to use as their headquarters and hide their Applied Phlebotinum. After the End, or in preparation for The End of the World as We Know It, openly known organizations may elect to move Beneath the Earth as well. And it's a good location for a Supervillain Lair.

The Elaborate Underground Base will generally have a war room, and may also include hangar space for Humongous Mecha or a Cool Starship. Particularly large examples may be the size of an entire city, and might include hydroponics bays for growing food or even actual fields of crops lit by sun lamps. The larger sizes of Elaborate Underground Base frequently serve as an Adventure Town; the smaller ones are frequently the setting for a Bottle Episode. If it was built during the Cold War, it may be Ye Olde Nuclear Silo.

Particularly secretive organizations may hide their Elaborate Underground Base in the middle of a city, and include lots of elevators, trams, pneumatic tubes, and other means of transportation between the base and hidden chambers in buildings on the surface. How exactly such an extensive base can be built in secret (among other things, all the excavated rock and dirt have to go somewhere) is very rarely addressed.

Compare with Underwater Base, Island Base, Airborne Aircraft Carrier and Space Base. Not to be confused with Underground City, which is built by civilians rather than a secretive organization. See Beneath the Earth for a related phenomenon, minus the Applied Phlebotinum. May induce Sigil Spam if the organization really loves their logo.