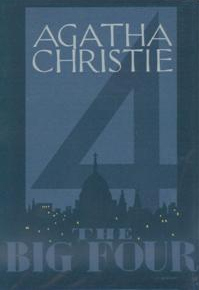 1927 novel by Agatha Christie. Almost immediately after Captain Hastings' return to England on business and to visit his friend Hercule Poirot, an uninvited guest appeared in Poirot's apartment coated from head to foot in dust. The man's gaunt face stared for a moment, then he swayed and fell.

Who was he? Was he suffering from shock or just exhaustion? Above all, what was the significance of the figure 4, scribbled over and over again on a sheet of paper? Poirot finds himself plunged into a world of international intrigue, risking his life to uncover the truth about 'Number Four'.

As you might have seen by the above summary, this particular installment is considered...strange for a Poirot novel. Agatha Christie apparently wrote it on the heels of a divorce and in need of money. Many of the chapters were originally short stories that she tied together with the overall plot.

In 2013, the book was adapted for the thirteenth and final season of Poirot, with a vastly differing plot, due to the screenwriter finding the novel to be "an almost unadaptable mess". Tropes for this adaptation are listed on the series page.