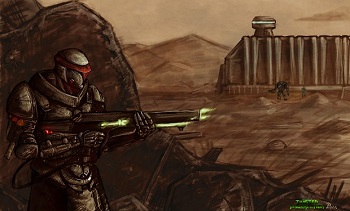 Just another day in the neighborhood.
Advertisement:

asks: what if they hadn't?

A freeware game based upon Command & Conquer: Tiberian Sun engine, Twisted Insurrection showcases an Alternate History where the Brotherhood of Nod won the first Tiberium war and, unusually for a Command and Conquer mod, comes packaged with two full-length campaigns for either side and its own soundtrack to boot. If you're craving your RTS fix, it's well worth your time.