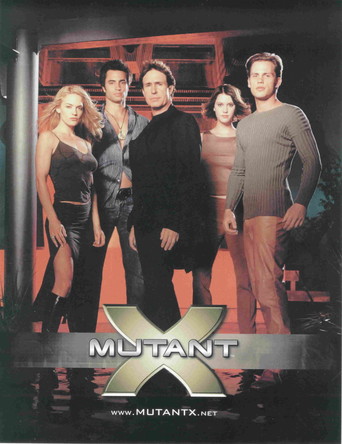 A television series created by Marvel Studios (a division of Marvel Comics) and Canada's Global (airing in syndication in the US), Mutant X centers around the eponymous team of "New Mutants" who possess extraordinary powers as a result of genetic engineering. Like hundreds of other unsuspecting people, the members of Mutant X were used as test subjects in a series of covert government experiments by Genomex, which now wants to control these New Mutants for its own purposes. The mission of Mutant X is to seek out their fellow New Mutants, help them come to terms with their abilities, and protect them from those who want only to exploit their powers.

Despite being a Marvel-owned property, Mutant X is unrelated to the comic book series of the same name that ran from 1998 to 2001, or anything else involving mutants and X-es from the standard Marvel Comics universe. However, according to Volume 5 of the Official Handbook of the Marvel Universe A-Z hardcovers, the Mutant X TV series takes place on Earth-704509, making it an Alternate Universe in the Marvel multiverse.

Even though the series had high ratings and was renewed for a fourth season, it was abruptly canceled in 2004 due to the show's main production company, Fireworks Entertainment, being sold to brand new owners.

Richard: Shal, I’ve never felt comfortable in my own skin. That’s what drove me to get my doctorate, take the position at Genomex. I'm using their technology to come up with a cure.
Shalimar: A cure? Richard, it's not an illness. It's a state of being.
Richard: A state of being that sets us apart.