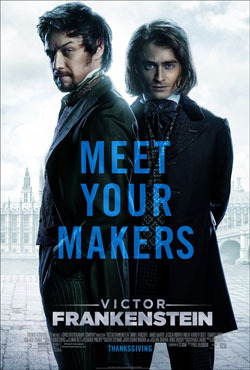 Discover the origin of the monster and his creation.
— Tagline on the UK poster
Advertisement:

Victor Frankenstein is a 2015 drama-horror-period film starring Daniel Radcliffe and James McAvoy, directed by Paul McGuigan and written by Max Landis. It is very loosely based on Mary Shelley's Frankenstein novel.

It is the early 1860s in Victorian London. Igor Strausman is a hunchback who is rescued by Victor Frankenstein, and Igor becomes Victor's protégé. Together, they engage in scientific research to discover the secret to immortality, but as Victor descends further and further into madness, their experiments lead to terrible and terrifying consequences.

You can watch the more light-hearted USA trailer here