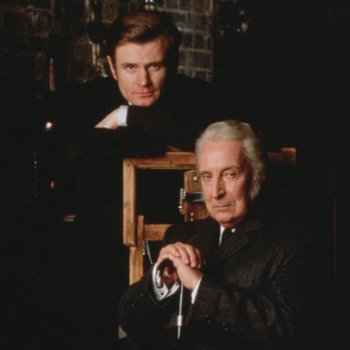 Dr. Doyle and Dr. Bell
"Life may be stranger than fiction. It is often more disturbing. Before I wrote my stories of the Great Detective, I had access to a terrifying world of mystery and murder. My companion and teacher on this journey was Dr. Joseph Bell. Here in this extraordinary man was my inspiration. But it is only now I have chosen to reveal the Dark Beginnings of Sherlock Holmes."
— Dr. Arthur Conan Doyle, Opening Narration
Advertisement:

Murder Rooms: The Dark Beginnings of Sherlock Holmes note  Also subtitled "Mysteries of the Real Sherlock Holmes" or "The Dark Origins of Shelock Holmes" in some markets. has the premise that Arthur Conan Doyle (Robin Laing in the Pilot Movie and Charles Edwards in the series) based his character of Sherlock Holmes on surgeon Dr. Joseph Bell, his old medical professor (Ian Richardson) with whom he used to solve murders. Bell did in fact exist, and it is said some of Holmes' personality traits and observational methods were based on him, but Doyle and Bell certainly did not solve murders together. Originally commissioned as a one-off drama, positive reception led to a full series of four 90 minute episodes.

The pilot has Doyle as a young medical student at Edinburgh University, where he quickly catches the eye of Dr. Bell who makes him his clerk and takes him under his wing. Together they are drawn in the hunt for a nasty serial killer stalking Edinburgh.

The series takes place after a Time Skip where the now Dr. Doyle is attempting to start a medical practice in the resort town Southsea, Portsmouth. Doyle struggles to establish himself and inevitably finds himself involved in a murder case. Doyle sends a letter to Bell asking for advice, and Bell decides to come down in person. Together they find a valuable ally with the local Inspector Warner who willingly seeks their expert medical and forensic advice for the most bizarre murders that seem to haunt the seaside town.

The series only has six episodes (or five depending how the pilot is edited).

Series One (2000) note  The pilot was originally broadcast in two parts but is often edited together on home video as one Pilot Movie.