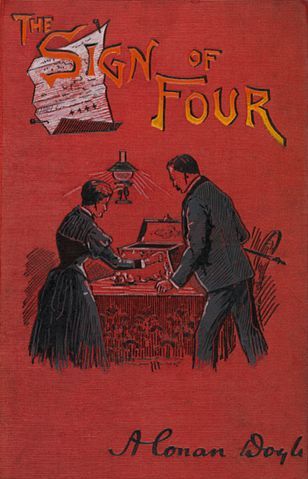 The Sign of the Four, also sometimes referred to as The Sign of Four, is the second novel to feature Sherlock Holmes. It was written by Arthur Conan Doyle and published in 1890.

In the novel, Holmes is approached by a young governess named Mary Morstan. Her father, Captain Arthur Morstan, has been missing for ten years, and once a year for the last six years she has received in the mail a valuable pearl from an anonymous benefactor. Holmes discovers that Captain Morstan's old friend Major Sholto, who knew Morstan from Army service, died not long before Miss Morstan started receiving pearls. They soon meet with Sholto's son Thaddeus, who reveals to them a wild tale of a mysterious treasure stolen by his father, who also concealed the accidental death of Capt. Morstan. Then Thaddeus's brother is murdered, and the plot thickens further.

For the 1932 film adaptation, see The Sign of Four: Sherlock Holmes' Greatest Case.