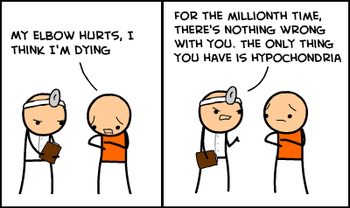 I *cough* can't Describe Hypochondria Here. I, I think I have Rigelian Fever. I can tell because I blew my nose three times today!

This trope is the tendency for people who too often, if not outright chronically, think they are coming down with diseases based on vague symptoms.

This is usually Played for Laughs in fiction, showing these people as whiny, lazy, and/or paranoid. This is especially common among Jews making fun of themselves for being like this. These are extra funny when the disease in question isn't even real (or it's extinct), even in the work of fiction.

This can be Played for Drama though if someone is actually debilitated by this, but it's rare. And in shows with Abusive Parents or Comedic Sociopathy, a character's genuine illness may be brusquely dismissed with accusations of this. "Pneumonia, my ass. You're just lazy!"

This can lead to a "Boy who cried 'Wolf'" moment when the hypochondriac actually does get sick.

These days, using the internet for self-diagnosis has become a new tool for this trope.

A Sickly Neurotic Geek is more likely to be this than actually sickly.

A Super-Trope to Induced Hypochondria.

Compare Terrified of Germs, Playing Sick, Hysterical Woman, Münchausen Syndrome (both when characters know they aren't actually sick), You Don't Want to Catch This (which is faking an illness for other reasons), Mistaken for Dying, Jewish Complaining (which often involves something that might get them sick).

Teri is a paper bear with serious germaphobia. This song perfectly describes her personality, in a J-Pop style.

Teri is a paper bear with serious germaphobia. This song perfectly describes her personality, in a J-Pop style.