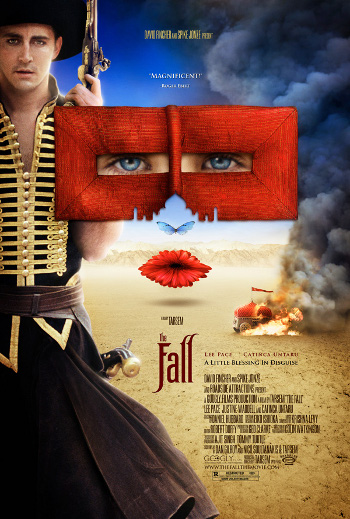 Roy: All right, close your eyes. What do you see?
Alexandria: Nothing.
Roy: Rub them. Can you see the stars?
Alexandria: ...Yes.
Advertisement:

A 2006 fantasy film by Tarsem Singh, based on the 1981 Bulgarian pirate story "Yo Ho Ho". The film took four years to shoot, in 26 locations in over 18 countries, and was funded by Spike Jonze and David Fincher. The trailer spoils most of its plot twists.

The Fall tells the story of Roy (Lee Pace), a crippled stuntman in early 20th-century Hollywood, and Alexandria, an inquisitive 5-year-old girl he befriends during his hospital stay. Roy has a broken heart and a death wish: during his last (and so far only) film, he tried a stunt his fellow stuntmen called downright suicidal, and was left crippled by his fall.

Confined to his hospital bed, Roy has a plan: he begins weaving for Alexandria the most epic adventure story ever told. It stars seven heroes — the Black Bandit, an Italian, an Indian, a Mystic, ex-slave Otta Benga, Charles Darwin, and Wallace the monkey — on a quest of revenge against the evil Governor Odious, each for their own reasons. With the story, Roy tries to get Alexandria excited about bandits, and about stealing… and for each installment of the story he tells her, he wants her to steal a little something for him in return.

But Roy has little idea how to talk to young children, and Alexandria is stubborn, barely speaks English, and still lives by the laws of her own child logic. The story Roy tells is seen entirely through Alexandria's eyes: every character (and prop) in Roy's story is imagined by Alexandria as someone (or something) she's seen in daily life. And it quickly becomes clear that her life so far has been extremely traumatizing. Her fantasy world is cute at first, but turns sinister as Roy sinks deeper and deeper into depression. Each time Alexandria makes an innocent mistake, Roy punishes her for it by punishing his characters within the tale. Finally, Alexandria decides that the story isn't safe with Roy, and she takes over the narration herself.

The Fall won a slew of "Best Picture" awards.

It is not based on, and should not be confused with, the Albert Camus novel of the same name. Nor does it have anything to do with the 2014 videogame, or with the Post-Punk band led by Mark E. Smith also called The Fall.