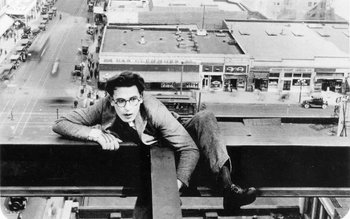 It was Lloyd's last short film, running to three reels, before he moved permanently into feature-length production. It was also one of his trademark 'thrill' comedies, featuring him dangling from a tall building. In this film, Harold works in an office on a tall building next door to his girlfriend Mildred (Mildred Davis). He assumes they will be married, but overhears her talking to a man who says to her, "Of course I will marry you." Little does he know this is actually her big brother, who has just become a priest.

Distraught, he decides to commit suicide, blindfolding himself and setting up a gun which will fire when he pulls a string attached to the trigger. But after putting on the blindfold he accidentally knocks over a lightbulb which pops, and he assumes he has shot himself. At that moment, a girder from the next door construction site swings into his office, lifting him and his chair outside. Pulling off the blindfold, he slowly realises he is high above the city, and climbs onto a building still under construction, trying to make his way down.