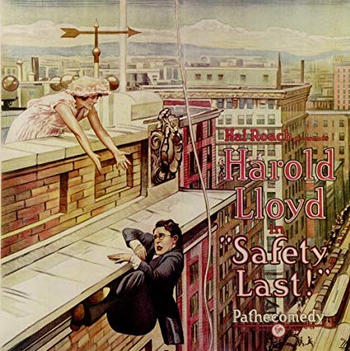 Harold Lloyd plays, uh, Harold Lloyd, who is a clerk in a department store. He's been telling his girlfriend back home (Mildred Davis) that he's a big success and sending her presents he can't really afford, which causes a problem when she comes to the city to visit him. Harold temporarily saves face by pretending to be the manager of the store, but a more permanent solution presents itself when the actual manager says he'll offer $1000note about $15,700 in 2021 to anyone who can come up with a good Publicity Stunt to attract attention to the store.

Harold concocts a scheme in which his good friend Bill (Bill Strother), a high-rise worker and "human fly" daredevil, will climb up the side of the store building for half of the winnings. However, when Bill finds himself having to flee from an angry policeman, poor Harold is left to perform the dangerous stunt himself.

The shot of Lloyd hanging from the clock is the Signature Scene of his career, and graces the cover of The Criterion Collection's Blu-ray/DVD set for the film. Its the Trope Maker of Stock Clock Hand Hang and most of subsequent examples are direct homages.