Film / Prince of the City 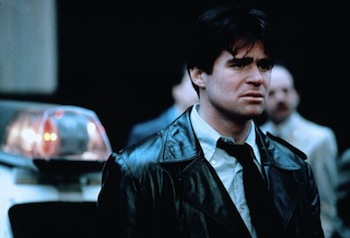 "I don't know why you people don't understand the system. You want a conviction, but you've got these stupid search and seizure laws. And wiretaps. Case one never got made without an illegal wiretap. And you're never gonna get a conviction if a cop don't commit perjury. What is it that you want? You want the big dealer out of business? The only way I know to push him out of business is to steal his cash. Otherwise somewhere down the line, he's gonna buy out. He'll buy himself a bondsman. A DA. A judge. The scumbag dealer's back on the streets before the arresting officer."
— Raf Alvarez
Advertisement:

Prince of the City is a 1981 film directed by Sidney Lumet, adapted from the nonfiction book of the same name by Robert Daley. It has a large cast (126 speaking roles) led by Treat Williams.

Daniel Ciello (Williams) is a New York City narcotics detective who reluctantly agrees to cooperate with a special commission investigating police corruption. However, he soon discovers that he's in over his head, and nobody can be trusted.