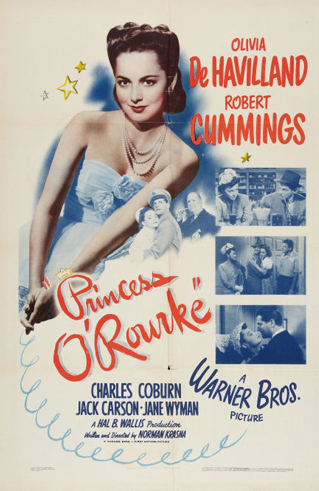 Maria (DeHavilland) is a princess whose uncle (Coburn) wants her to marry and produce heirs for their Ruritania country; however, there aren’t many royals that interest Maria, so her uncle decides to send her off to San Francisco to think her options over. Because Maria fears flying, she’s takes sleeping pills during her flight, but they’re so ineffective that she ends up taking five of them and still feels no effect.

After six pills, she can’t wake up even when her flight has been grounded due to fog. Consequently, she must stay overnight with the plane’s co-pilot, Eddie O’Rourke (Cummings), who has no idea where she lives or that she's a princess, and has to ask for the help of his friends Dave (Jack Carson) and Jean Campbell (Jane Wyman). Maria comes to and decides to take up Eddie's proposition to spend the day with him. Meanwhile, her uncle's secret service man spies on them as they both slowly falls in love. But Maria knows they can’t marry because of her royal blood. Fortunately, her uncle thinks that it can be a good PR move to marry a normal American.

But Eddie doesn’t want to be so wholly controlled by tradition and the obligations of the crown, especially since Maria is under the thumb of her uncle.

Krasna went on to win the Academy Award for Best Original Story. Roman Holiday can be considered the Spiritual Successor to this film, as they share many themes and even plot lines.