Film / Prick Up Your Ears 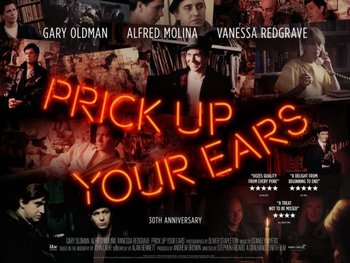 Prick Up Your Ears is a 1987 British film that is a Biopic of playwright Joe Orton, directed by Stephen Frears. It stars Gary Oldman as Orton and Alfred Molina as Orton's lover (and eventual murderer) Kenneth Halliwell.

Told in flashbacks which trace Orton and Halliwell's initial meeting at the Royal Academy of Dramatic Arts, when the older and more worldly Halliwell takes eighteen-year-old Orton as both a lover and a Protégé. Eventually Orton's writing career takes off, turning the power dynamic in their relationship on its head. Halliwell grows increasingly insecure and smothering as Orton grows more popular and successful, leading to an ultimately fatal downward spiral.