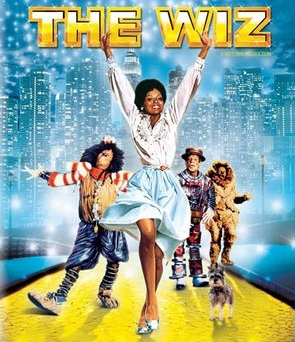 Ease on down the road!
"What am I afraid of? Don't know what I'm made of. Can I go on not knowing?"
—Dorothy, "Can I Go On?"
Advertisement:

Motown and Universal produced a movie adaptation of the Broadway musical The Wiz, an all-African-American retelling of the book The Wonderful Wizard of Oz, in 1978. It was directed by Sidney Lumet and Joel Schumacher wrote the screenplay. In addition to the Race Lifting, this added a further, big twist to the Oz tale: Instead of turn-of-the-20th-century Kansas, the story begins in modern Harlem and Dorothy is a shy schoolteacher in her 20s who has never ventured beyond it — a change made to accommodate the casting of Diana Ross (in her 30s at the time) in the role, as she had campaigned heavily for it

. It's a blizzard that sweeps her to Oz, a fantasy version of the rest of New York City. The Tin Woodman is now a forgotten amusement park robot, the Cowardly Lion masquerades as a statue outside the Public Library, the Wicked Witch of the West (here named Evillene) runs a sweatshop, etc. It remains notable for marking the end of Blaxploitation in cinema, and for its All-Star Cast of African-American talent, from Richard Pryor as the Wiz himself to Lena Horne as Glinda to a 19-year-old Michael Jackson as the Scarecrow (his only major film role, not counting the anthology Moonwalker and his cameo in Men in Black II)note Jackson's casting in the film brought him to the attention of its music producer, Quincy Jones, who convinced Jackson to let him produce what would become his three most successful albums..

Not to be confused with The Wizard. Also, information about the 2015 TV special The Wiz Live! can be found on the same page as the Broadway musical.