Film / The Prince and the Showgirl 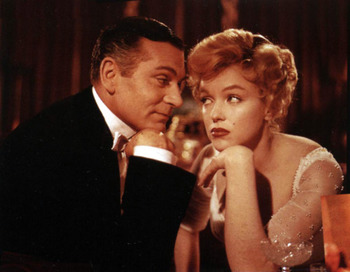 The Prince and the Showgirl is a 1957 Screwball Comedy starring Laurence Olivier and Marilyn Monroe, and directed by the former. It was adapted from Terence Rattigan's play The Sleeping Prince.

Set against the backdrop of the 1911 coronation of King George V, the film stars Olivier as Prince Charles, a strict Ruritanian regent, and Monroe as Elsie Marina, a fun-loving American showgirl. Before long, Elsie becomes involved not only in a royal romance, but in some international intrigue which could lead to a world war.

Twenty-first-century audiences may know this movie best as the Film Within a Film in My Week with Marilyn. Coincidentally, My Week With Marilyn was released in 2011, exactly a century after the 1911 setting of The Prince and the Showgirl.