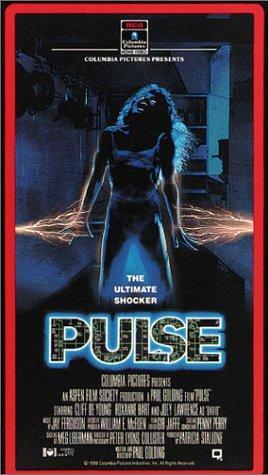 In every second of every day, it improves our lives. And in a flash, it can end them.
Advertisement:

In this 1988 horror film, a highly aggressive, paranormal intelligence thriving within the electrical grid system of Los Angeles, California is moving from house to house. It terrorizes the occupants by taking control of the appliances, killing them or causing them to wreck the house in an effort to destroy it. Once this has been accomplished, it travels along the power lines to the next house, and the terror restarts. Having thus wrecked one household in a quiet, suburban neighborhood, the pulse finds itself in the home of a boy's divorced father whom he is visiting. It gradually takes control of everything, injuring the stepmother, and trapping father and son, who must fight their way out.

No relation to the 2001 Japanese horror film Kairo, known as Pulse in the West (and its American remake of the same name). It is equally unrelated to the 2015 horror game, or to superhero webcomic.