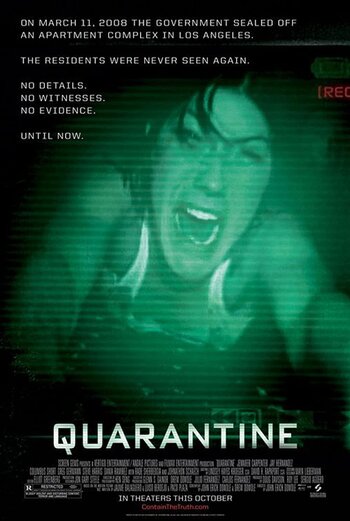 Quarantine is a 2008 American Found Footage horror film directed by John Erick Dowdle, who also wrote the sceenplay with his brother Drew. It's a nearly-Shot for Shot Remake of the Spanish horror film [REC].

Angela Vidal (Jennifer Carpenter) is a news reporter for a Los Angeles television station, who's shadowing a local squad of firemen for a feature when they get called to a nearby apartment complex to assist with a medical emergency. Before they know it, Angela and her cameraman Scott (Steve Harris) wind up filming the discovery and progression of an apparent zombie-style viral outbreak, which forces the CDC and military to seal off the building, trapping everyone inside.