Hanging by the Fingers 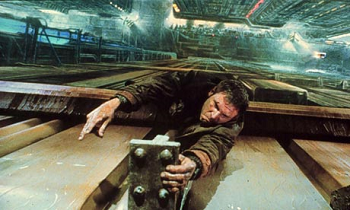 A character is holding onto a ledge or rope by their fingers. One by one, each finger loses its grip or someone or something peels them off manually.

The trope is often paired with a villain at the ledge stomping on their hands or peeling the finger off. When there isn't a villain around, another hero will try to grasp their hands. If Played for Comedy, the rescuer may themselves fall and have to be grabbed by an even stronger person.