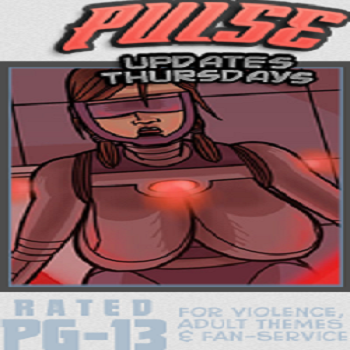 is the story of Annie Chang, a young robotics engineer and "battery" (a person who can store and discharge electricity) in training to become a superhero named Pulse along side her designated partner Tabitha (aka Bolt). And, um, a few other things.
Advertisement:

Pulse is something of a legacy character for the author, Lightfoot; although the current strip dates to 2010, it's actually a continuity reboot of an older strip called Pulse, the Blue Bombshell that began in 1999; although the original is no longer on the net, some of Lightfoot's earlier work is available on his DeviantArt page (NSFW stuff is flagged, but there's lots of fanservice)

. The current iteration begins in the wake of a mass slaughter of superheroes; Annie's father works for a secret government project near the Great Lakes to find and train a new generation of superheroes. Annie has a natural talent for controlling electricity, and has always aspired to be a superhero, but until recently never had enough power; when she does, develop, though, she develops to a nearly ridiculous degree. She's paired up with caustic test pilot and fellow battery Tabitha "Bolt" Greene, and they're given matching power suits and the ability to heal each other. The story so far is of Annie trying to get used to being a hero in training, as well as the awkwardness of her new body.

In addition to the comic's website, the series is also hosted here

This webcomic provides examples of the following: