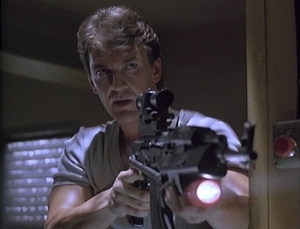 "Superior? You're a fucking fish with a drug habit!"
"Proteus had moved on to new level. It had converted shark's tissue into a new form. Amorphous. That night, it crawled out of tank and consumed every other specimen in the aquarium. We were overjoyed! (Beat) We were idiots..."
— Dr. Shelley
Advertisement:

Proteus is 1995 horror film starring Craig Fairbrass and Doug Bradley. It concerns drug smugglers Paul, Mark, Linda and Christine, along with two undercover DEA agents named Alex and Rachel, being shipwrecked and seeking refuge on an abandoned oil rig owned by the mysterious Brinkstone Corporation. Aboard, they find a top secret genetic engineering facility, and the shapeshifting horror that the Brinkstone scientists accidentally unleashed.

The script was written by John Brosnan a.k.a. Harry Adam Knight, based on his and Leroy Kettle's novel Slimer. In addition to changing both the title and the name of the compound which creates the monster, Brosnan also switched around characters' names and roles, making Alex of all people the likable DEA agent hero! While mostly a generic Alien ripoff with a dash of Leviathan (1989) and The Thing (1982) thrown in, Proteus still has some good moments and is a far more faithful Brosnan adaptation than the earlier Roger Corman Carnosaur.

Not to be confused with the historical documentary Proteus: A 19th Century Vision. Or the indie video game Proteus.

Tropes used in this movie: