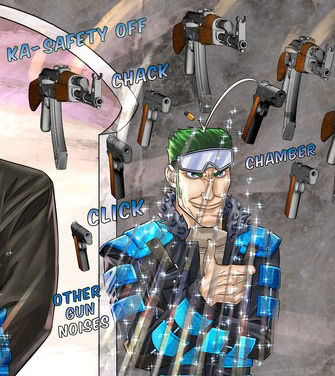 The advantage with telekinetic powers is that you can make lots of gun noises all at once.
"Clicker-Clack Effect: The firearm counterpart to the Snicker-Snack Effect. Whenever a character is holding a gun and waves it for emphasis, regardless of whether the character actually cocks the gun, or if the gun even has a hammer to cock, it makes a cocking noise."
— Matt Griffin, Ebert's Little Movie Glossary

In real life, guns are carefully designed, well-constructed tools that — provided they are well maintained — can last a lifetime. Or somebody's lifetime, anyway. On TV, they're apparently filled with rusty nails and loose change, and held together with masking tape.

As a result, whenever someone hefts a weapon — particularly if it's a machine gun or submachine gun — it will make a whole load of clicking, clacking and clonking even though all they're doing is rotating it through 90 degrees. This trope is partly the result of the fact that a noisy gun adds drama to the scene (see Dramatic Gun Cock and *Click* Hello), and partly because without all those familiar clicks, the audience would probably mistake even a real firearm for a rubber prop.

Media also routinely depicts guns being dry fired more than once when they run out of ammo. The "Click Click Click" sound lets the audience know it's empty. Unfortunately, not all guns in the real world can do this. Pump-action shotguns, single fire rifles, bolt-action rifles, lever-action carbines, and even single-action pistols and revolvers — none of these will repeatedly dry fire without a re-cock.

Double-action pistols and revolvers will fire on every trigger pull, of course. The name refers to the "double action" of the trigger — every pull advances the cylinder, cocks the hammer, and then releases it to fire the weapon. You can dry fire a double action weapon all day without ever touching the hammer. Of course, you still can't get the empty click-click-click from a double-action semi-automatic just by continuing to pull the trigger, since on the vast majority of designs (and on a great many semi-auto and full-auto rifles as well, but this trope is far more common with pistols anyway) the slide will lock back on an empty magazine — but that's neither here nor there. This trope probably originated from the time when double-action revolvers were the most popular handguns in the United States, and a great many movie directors are either unaware or don't care that other guns don't work the same way.

Electrically powered firearms, like gatling-style cannons used on aircraft, will dry fire as long as you hold down the trigger.

A sub-trope of the The Coconut Effect. May or may not be a side effect of Reliably Unreliable Guns. Related to Bang, Bang, BANG. Subtrope of Kinetic Clicking. If you're thinking of intentionally making a noise to announce an entrance or punctuate a phrase, see Dramatic Gun Cock, and please don't add examples of it here. For the Sword Counterpart of this, see Audible Sharpness.

Finally, note that guns in real life are very, very noisy when fired, so much so that hearing protection needs to be worn — this trope is about the noises a gun makes when it isn't being fired.