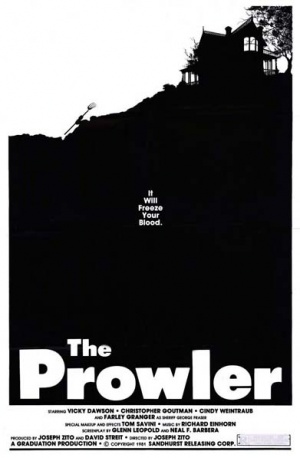 Unless you are Hot-Blooded.
"I want you to be my date, Rose."
— The Prowler
Advertisement:

The Prowler, also known as Rosemary's Killer, is a Slasher Movie from the year 1981 starring Farley Granger and Lawrence Tierney. It was directed by Joseph Zito and the film's gore effects were done by the legendary Tom Savini. Both would later contribute their respective talents to another slasher film, Friday the 13th: The Final Chapter.

Starting at the year 1945, the film opens with a news reel depicting the homecoming American troops from World War II. One of these returning troops isn't happy, as his girlfriend Rosemary had dumped him during the war (with a "Dear John" letter, no less).

Several months later at Rosemary's hometown Avalon Bay, he kills her and her new boyfriend during the town's annual graduation dance. He is never caught.

Cut to 35 years later, where the town prepares for its graduation dance once again. There hasn't been one since the events of the opening. The killer decides to partake on the event as well, armed with a pitchfork, a bayonet and a Sawed-Off Shotgun.

No, he has no relation to the uncle of Miles Morales.

Not to be confused with the 1951 Film Noir of the same name.