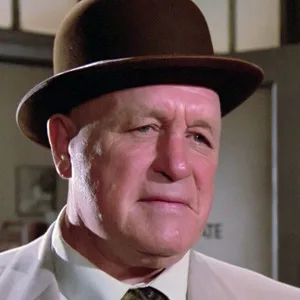 Lawrence James Tierney (March 15, 1919 – February 26, 2002) was an American actor. He was known as a legendary Hollywood "tough guy", on screen and off, playing the title character in Dillinger (1945) and as the consummately brutal lover of Claire Trevor in Born to Kill (1947).
Advertisement:

The Brooklyn-born son of a NYPD officer, the alcoholic Tierney was also notorious for his frequent, well-publicized past involvements in public altercations — like barroom brawls — and other real-life manifestations of rowdiness. (In a 1973 incident, he managed to get himself stabbed.)

In later years, though now a puffy-faced, totally bald old man, he continued as screen actor to project the hard-as-nails mien that has been ingrained since his younger days, as he evidenced quite amply in Quentin Tarantino's Reservoir Dogs (1992). You might also know Tierney as the voice of the Try-N-Save store detective from the Simpsons episode "Marge Be Not Proud" (the season seven Christmas Episode where Bart's shoplifting of a popular video game causes Marge to emotionally disconnect with him).

Tierney died of pneumonia at age 82 at a Los Angeles nursing home on February 26, 2002. His final acting role was a small part in the 2000 independent film Evicted, written and directed by his nephew Michael Tierney.

No, he wasn’t related to Gene Tierney or Maura Tierney, although his brother, Scott Brady, had a lengthy acting career in his own right.