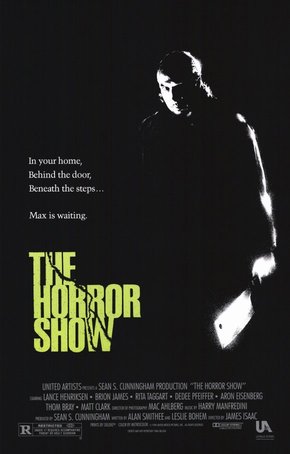 They tried to electrocute "Meat Cleaver" Max. It didn't work.
"Lucas, I'm coming back to tear your world apart... I'm going to fuck you up."
— Max Jenke, making a dying promise
Advertisement:

The Horror Show is a 1989 horror film. The film was released in some countries outside the United States as House III: The Horror Show, even though it has no connection to the previous films in the House franchise.

The story centers around police detective Lucas McCarthy (Lance Henriksen), who becomes target for an otherworldly revenge from an executed Serial Killer "Meat Cleaver" Max Jenke (Brion James), whom he helped to bring in.