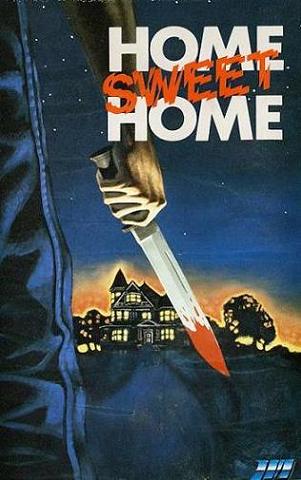 Be it ever so humble, there's no place to HIDE!

Home Sweet Home (also known as Slasher in the House) is 1981 Slasher Movie, as you can probably tell from the alternate title.

In 1973, eighteen-year-old drug addict Jay Jones beat both his parents to death, but was deemed insane and stuck in a Los Angeles asylum. Eight years later, on Thanksgiving Day weekend, Jay escapes and goes on a PCP-fueled rampage, eventually ending up at the secluded ranch house of Harold Bradley, whose friends and family have gathered together to celebrate the holiday. Suffice to say, Jay is going to make the revelers a little less thankful...

As far as eighties slashers go, Home Sweet Home is exceedingly generic, but it does have two noteworthy things going for it. One, it was the first (and is still one of the few) horror films set around Thanksgiving; and two, it happened to star famous Hollywood fitness guru "Bodies by" Jake Steinfeld, who gives a deliciously hammy performance as the completely batshit Jay.

Not related to the 2017 Thai horror game Home Sweet Home. Or the Hong Kong horror film from two decades later, Home Sweet Home (2005). Or the song by Mötley Crüe.