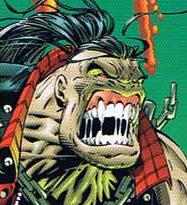 Oral hygiene is for chumps!
Advertisement:

In comic books and animated works, one way to demonstrate that a character is a no-nonsense badass, creepy or just plain pissed is to show them with strands of saliva, phlegm, drool, or some other mucus dangling between their teeth. Popularized by the various Rob Liefeld clones during The Dark Age of Comic Books, but examples predate that period.

This occurs because drooling and oral messiness tends to invoke a Squick response in many people, making phlegmings a convenient visual shortcut for invoking Primal Fear. For instance, it may show anticipation of a good meal (e.g., the heroes/villains) in predator characters. Or, it may be a sign of disease, like rabies.

In comic book images like the one shown, a saliva trail between upper and lower jaws works as a visual shorthand, indicating that the mouth has just now been opened (since such trails would be expected to disappear after a moment). Thus their use helps create a feeling of immediacy, that what you're seeing is a "snapshot" rather than a posed image.

A common trope for characters with More Teeth than the Osmond Family. Contrast with Gonk, the blatant uglification of a character. See also *Drool* Hello, Perverted Drooling and Spit-Trail Kiss for other tropes involving high-viscosity saliva.

Cookie for you if you thought this was a trope about snot-based video game enemies. Or to do with a language spoken in Belgium.