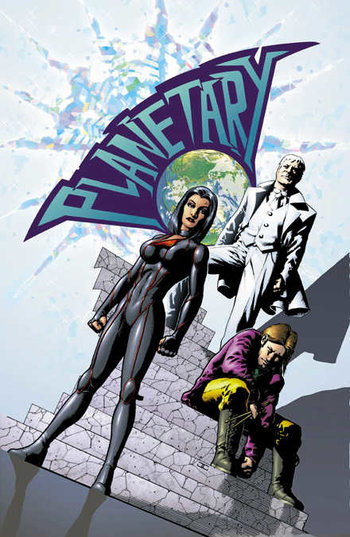 Jakita Wagner, Elijah Snow and The Drummer
"It's a strange world. Let's keep it that way."
Advertisement:

Comic Book series written by Warren Ellis. The series revolves around a trio of "mystery archaeologists" tasked to expose the secret history of the WildStorm comic book universe and protect these secrets from a quartet known as "The Four" who seek to hoard the secrets for their own selfish desires.

The series was conceived as a metaphorical anthology series for Ellis: each issue would be a different genre and theme, with the only constant being the main trio. However, due to artist John Cassady being poached for work on mainstream books such as Captain America and Astonishing X-Men, and Warren Ellis quickly growing tired of the book (having regretted giving up The Authority to Mark Millar and seeing that book become a huge genre changing mega-hit), the series hit a massive Schedule Slippage crisis that led to the series being released on a severely sporadic schedule after issue #12, for the remainder of the series run.

A persistent background mystery in the early part of the series is the identity of the mysterious "Fourth Man" who founded the Planetary organization. Elijah Snow's discovery of the Fourth Man's identity in #12 is a significant turning point in the series.

In addition to the main series, there were three crossover one-shots: Planetary/The Authority: Ruling the World (2000), Planetary/JLA: Terra Occulta (2002), and Planetary/Batman: Night on Earth (2003). (Alternate universes were involved for the two DC Universe crossovers.)