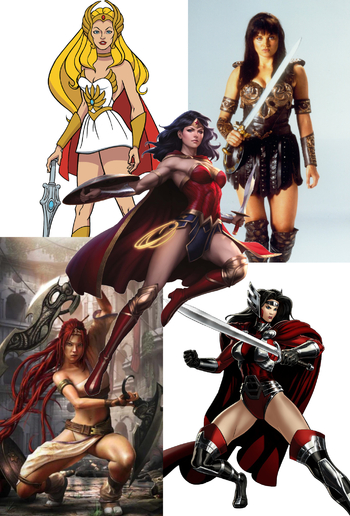 The Wonder Women are here!note Center: Diana herself. L - R, top to bottom: She-Ra, Xena, Nariko, Sif
"...if I were going to save you in a dramatic fashion, I would totally dress as Wonder Woman."
— Kate Kane, Batwoman (2019)
Advertisement:

Wonder Woman is more than well known for being the first comic book superheroine and for setting the stage for more female heroes to come after her, whether as original characters or a Distaff Counterpart to a male hero. However, some comic writers in other companies take some inspiration from the character herself when creating their own superhero universe. Indeed, most creators often copy from Diana's origins, powers, costume, and even her whole supporting cast to make essentially an Expy.

Across various comic companies, there are many a Captain Ersatz of Wonder Woman in some form. No matter if this character in question is played straight, parodied, or deconstructed, there will be a female superhero that takes cues from the Amazing Amazon.

These characters often include the following traits: