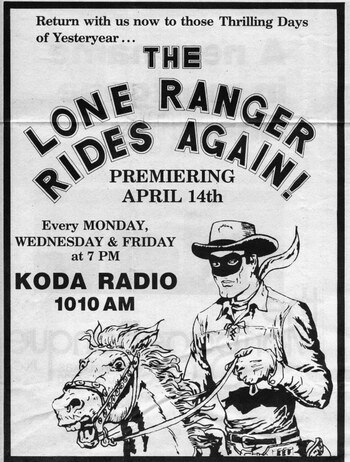 The Lone Ranger is a radio series that first premiered on Detroit, Michigan’s radio station WXYZ on January 30 or 31, 1933 and ran for over 3,000 episodes (the 20th anniversary episode bills itself as the 3,128th adventure). The character was the brainchild of George W. Trendle and Fran Striker. According to actor/director Chuck Livingston, who began working on the show in August 1933, George Trendle wanted to create essentially a Robin Hood type character in the old West. Original director Jim Jewell found writer Fran Striker, and between them and Trendle they created the character. The tales of his tragic origins, partnership with Tonto, and selfless heroism to defend the innocents of the American frontier led him to become an enduring icon of American culture.

While Tonto was voiced by Creator/Fred Mc Carthy, who went by the stage name John Todd, throughout the series (with isolated occasions when he was replaced by Raleigh Parker), the Lone Ranger himself was voiced by a number of voice actors: