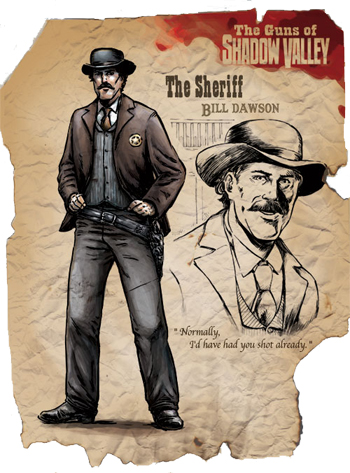 In the United States, a sheriff is generally the chief law enforcement officer for a county or parish. It is usually an elected position, though in emergencies a sheriff may be appointed by county officials. Sheriffs and their agencies have the most influence in areas without a local police force, so expect to see them in rural areas or Small Towns.

In a Western, the Sheriff is generally the closest and main law enforcer. Their function in a story is very flexible, ranging from The Hero through Reasonable Authority Figure and Obstructive Bureaucrat to Corrupt Hick. It's a very lucrative and powerful (within the county) position, but also comes with great danger and responsibility.

In most works of fiction, the sheriff wears a distinct badge, usually star-shaped. And the sheriff usually is not the highest authority; he is actually appointed by and answers to an Ultimate Authority Mayor, who may occasionally be a Corrupt Politician. A corrupt sheriff, however, can have influence over a weak mayor. If the sheriff is ever disgraced or otherwise found to be morally unworthy of his title, the customary action is for The Hero to shoot a hole through this badge, symbolic of the title being stripped.

He's usually assisted by at least one Deputy Sheriff (often a Clueless Deputy), whom he appoints. Officers working for the sheriff's office are known as deputies, as they act as substitutes for the sheriff. Thus one of the stock tropes of the western is the county jail with its one cell, a desk for the sheriff and, across the room, a smaller desk for his deputy.

In some Westerns, "Sheriff" is conflated with "Town Marshal" (not to be confused with the U.S. Marshal, like Marshal Dillon), a more localized version. If the plotline is about cleaning up one lawless town, with no reference to the rest of the county, you may be seeing this in action.

The Sheriff often handles minor offenses himself, locking up drunks and rowdies for the night. But serious crimes must be held over until the Circuit Judge arrives.

In westerns, this character often overlaps with The Gunslinger, though this is not always the case. A Real Life example of a non-gunfighter sheriff was Bat Masterson, who preferred the "big stick" approach.

As a stock plot, The Gunslinger (sometimes, the Young Gun, but if so he'll have his more experienced advisor with him) comes into town, and is immediately appointed The Sheriff by the townspeople. This invariably means there's a villain (an Outlaw or a old-west-style Corrupt Corporate Executive) in town who has run off or killed the old sheriff and is terrorizing the townspeople, stealing cattle, cheating at poker, and probably not paying his brothel bill. It's up to the new guy to avoid getting killed, beat the villain, then move on. Also see The Drifter for more detail on this.

The name is derived from the English "shire reeve", corrupted to "sheriff" over time. The position had similar duties and powers, but was appointed by the Crown. Perhaps the most famous Sheriff is the Sheriff of Nottingham. Outside of the US, a sheriff is normally a ceremonial post; in Scotland they are judges.

In the modern day, sheriffs tend to use their guns a lot less. In metropolitan counties, the sheriff's department generally runs the jail and does process serving, among other duties. As with everything else in America, this varies not only from state to state, but also from town to town. As with police chiefs, sheriffs are desk-bound managers in all but the smallest agencies. Regardless, as sheriffs are usually elected officials, they're usually politicians, with all the good and bad that entails.