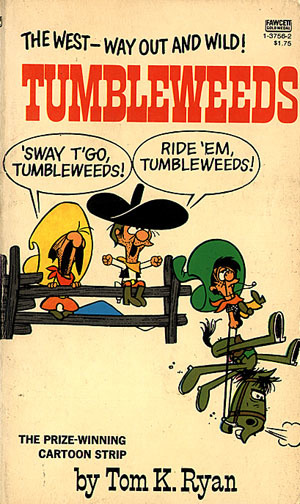 Tumbleweeds is a newspaper comic strip that ran from September 1965 to December 30, 2007, first distributed by the Register and Tribune Syndicate, then by King Features Syndicate. It was written and drawn by Tom K. Ryan (1926-2019), who usually signed the work under "T.K.Ryan".

Featuring a large cast, the comic strip was about the title character, Tumbleweeds, a cowboy based in the town of Grimy Gulch somewhere in the old West. Notable characters included (but are not limited to): Hildegarde Hamhocker, the only woman in town who was obssessed with marrying Tumbleweeds; The Sheriff and his inept assistant, Deputy Knuckles; the nearby military unit, the 6 7/8 Cavalry; and a local Indian tribe, the Poohawks. (See the other Wiki entry

for more details on the extensive cast.)

The strip itself followed a gag-per-day format, focusing on Tumbleweeds, the townspeople, the 6 7/8 Cavalry, the Poohawks or any combination of those characters; various conventions of The Western were parodied.

Tumbleweeds was notable enough that its characters were featured as an attraction at MGM Grand Adventures Theme Park in Paradise, Nevada. A Tumbleweeds stage play was also written, usually being performed in school theater.

Various books were released over the years reprinting the strips. Fawcett printed a number of titles in the United States from the 1960s through the 1980s. Beaumont released a number of soft-cover magazine size books in Australia and New Zealand in the 1970s and 1980s.