Film / Angel and the Badman 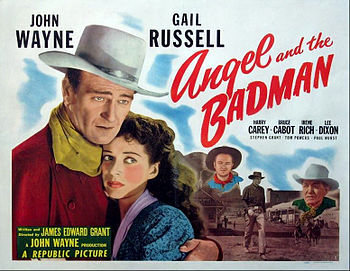 Notorious gunslinger Quirt Evans (Wayne) is badly wounded in a gunfight. Fleeing, he arrives on a farm owned by a Quaker family, and falls in love with their adult daughter Penny Worth (Russell). He begins to get used to living on the Worth farm, solving some local problems for them, but then his old enemy Laredo Stevens (Cabot) comes calling.

The film inspired the Johnny Cash song of same name, as well as the later films Witness and The Outsider. It was remade in 2009 as a Made-for-TV Movie by the Hallmark Channel, with Lou Diamond Phillips as Evans.