Film / The Adventures of Captain Marvel 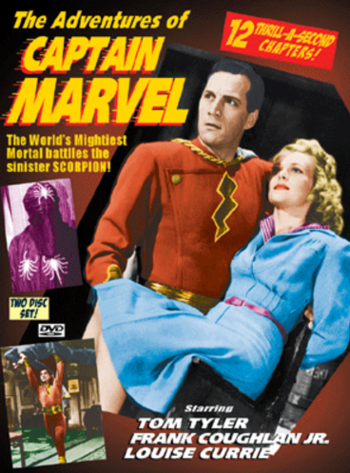 Back in the 1940's, Captain Marvel was quite the trend setter. He was one of the first superheroes to really utilize multi-issue storylines and continuity (including the Monster Society of Evil ongoing story that lasted 22 issues), the first hero who literally transformed from a normal mortal into a superpowered alter ego, one of the first true Flying Bricks in comics (combining true flight with strength and invulnerability even before Superman), his sister Mary Marvel was the second Distaff Counterpart in comics (right after Hawkgirl), and in this instance, the very first superhero to appear on the big screen.

The Adventures of Captain Marvel was a 1941 film serial starring Tom Tyler as Captain Marvel and Frank Coghlan Jr. as Billy Batson. The 12 chapter serial focused on the Malcolm Expedition, a group of Adventurer Archaeologists who discover an ancient tomb which holds the prized Scorpion Idol. The idol contains several lenses that, when properly aligned, could cause a number of different effects, from transmuting the elements to completely obliterating matter. The scientists decide to divide the lenses among them to ensure that the idol cannot be used without the consent of the entire group. However, almost immediately one of the scientists assumes the masked identity of the Scorpion, and steals both the Scorpion Idol and the scroll which tells how to use it. The Scorpion then sets into motion a plot to steal the lenses from the other scientists and become the most powerful individual on the planet.

All is not lost though. Billy Batson, who was along to report on the discovery and chose not desecrate the tomb, is secretly chosen by the wizard Shazam to see to it that the Scorpion Idol is not used for evil. To do this, Billy is granted the power to become Captain Marvel by speaking the wizard's name. Using the power of Captain Marvel and his own resources, Billy must uncover the secret of the Scorpion's identity and prevent the master criminal from gaining all the lenses and using the full power of the Scorpion Idol.

As the first superhero film of its time, The Adventures of Captain Marvel had a lot of new ground to cover. Since no one had done a serial like this before, the studio utilized aspects of other serials, borrowing from the archeologist/explorer and murder/mystery genres, as well as having a lot of aspects similar to pulp heroes of the day. There was a lot riding on the serial as well, as it would basically decide whether or not superhero films were a viable option. That there was an explosion of superhero serials following it is a testament to the film's quality, and its importance to the superhero film genre cannot be overstressed.

Today, The Adventures of Captain Marvel is considered one of the best Film Serials ever made along with the three Flash Gordon epics.

The character of Captain Marvel is also the main hero of a 1970s TV show, and after a name change to "Shazam" a 2019 movie. He also has no relation to the Marvel Comics Captain Marvel character.

The Adventures of Captain Marvel provides examples of: