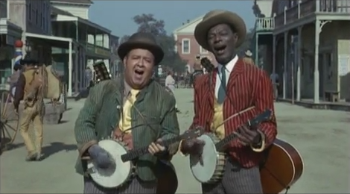 These guys are just walking around town, singing a ballad about the next scene. Probably because it's a small town and there isn't much else to do.
Silas: That old shack, well it went tumbling right off that cliff.
Steve: With Frank James still in it?
Silas: Yes sir.
Dwight: But... Frank James is still alive, living in Missouri. Showing folks around the family farm for 25 cents a tour!
Silas: I didn't say he died in the fall, now did I?
— Call of Juarez: Gunslinger
Advertisement:

A minor character or group of minor characters who offer commentary and/or opinions on the actions of the main characters, usually by Breaking the Fourth Wall and addressing the audience directly. Often, they say what the audience thinks (or should think). While a lead character can do this himself, it doesn't make him a Greek Chorus; a proper Greek Chorus differs by being removed from the action and thus able to view it with something approaching objectivity. The role is frequently played by Those Two Guys. It's one use for the First-Person Peripheral Narrator.

Strictly speaking, an omniscient narrator usually wouldn't qualify as a Greek Chorus. However, the lemony type who repeatedly breaks the Fourth Wall and makes asides to the audience to the point that they're a "character" unto themselves might reach the point where they overlap with it. If the narration is revealed to be by an actual main member, retroactively telling the story to someone else, it may count, but the important qualifier is that their opinions are objective and express what the audience would think (if they are retroactively self-deprecating of even their own actions, etc.).

Named for the choruses of ancient Greek theatre, who did exactly this. Aristotle discussed them in Poetics and warned that they should be used as little as possible, because (in modern paraphrase), what they do is, by definition, commentary, not story — and so the story-teller should avoid being sidetracked by using more than it needed to help the story. If you were looking for actual choruses in the Greek language, that might fall under Gratuitous Greek.

The Snark Knight, if not the main character, often fits this role. See also Fourth-Wall Observer.

Compare this to MST, when the comments come from outside the story.