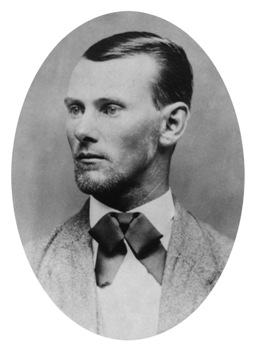 "Some editors call us thieves. We are not thieves—we are bold robbers. I am proud of the name, for Alexander the Great was a bold robber, and Julius Caesar, and Napoléon Bonaparte."
— Jesse James
Advertisement:

Jesse and his elder brother, Frank, fought as guerrillas with the bushwacking Quantrill's Raiders during the American Civil War. In sharp contrast to the later myth of the James as poor farmers and soldiers turning to war, the James family were relatively well-off. They had a substantial farm growing hemp and tobacco before the Civil War, and they owned seven slaves. The Younger Family (Cole, Jim, Bob and John), future allies and compatriots of James' gang were in fact descendants of the richest slaveowning family in Jackson County, Missouri. The James and Younger family served alongside the notorious William Quantrill and Bloody Bill Anderson in several guerrilla wars in Kansas and Missouri against the Jayhawkers, anti-slavery militants from Kansas. They were involved in the Lawrence and Centralia Massacres in particular.

His criminal fame took off after Anti-Reconstruction newspaper editorials claimed that Jesse and Frank wanted revenge for the appropriation of their family and neighbors' farms by investors who wanted to build a railroad there. Their robberies sabotaged railroad constructions and they robbed banks where the investors kept their money. Even during his life, the James and Younger gangs were seen as folk heroes and living legends, which elevated Jesse James as a Robin Hood character, who rebelled against the government and gave his stolen goods to the poor. While it's true that in only two train hold-ups passengers were robbed since James typically limited himself to the express safe in the baggage car, the gang always kept the money to themselves. They also killed civilians and took medicine intended for the poor and needy.

An attempt to rob a bank in Northfield, Minnesota in 1876 was met with whole bunch of gunfire and the Youngers were arrested. Jesse and Frank managed to escape and kept hidden for three years. In 1879 they started a new gang robbing banks and trains. In 1882 the 34-year-old Jesse was murdered by one of his own gang members, Robert Ford.