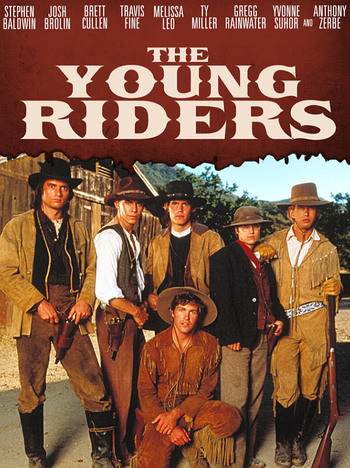 The Young Riders was a Western TV series that ran on ABC 1989-1992. It focused on a group of Pony Express Riders under the care of a quirky former Texas Ranger called Teaspoon Hunter. The show played some liberties with history, and the Western legends to-be Wild Bill Hickok (Jimmy), Buffalo Bill (Cody), and Jesse James were all among the main characters. During the show, hothead Jimmy Hickok became increasingly troubled by his reputation, while class clown Cody could be seen starting his showbiz career in tiny steps by acting in a theater production and writing stories about his rider friends. Jesse James joined the group in season 3 as a young boy.

The other riders were Kid (unrelated to "Billy The..."), who came from a small farm in Virginia, disguised girl Lou, Indian half-breed Buck, his mute best friend Ike, and by the second season Noah, claimed to be first black regular on a Western TV show (The Outcasts co-starred a black man 1968-1969 season

on ABC; you could even make a case for Silas on The Big Valley). The station house was cared for by housekeeper Emma Shannon in the first season and Rachel Dunne in the second and third. US Marshal Sam Cain also featured in the first season.

The characters spent more time fighting bad guys than delivering mail, a course of action facilitated in the second season when Sam left the show and Teaspoon took over his job as marshal, deputizing the riders whenever he needed to.

& the terrestrial channel Get TV.