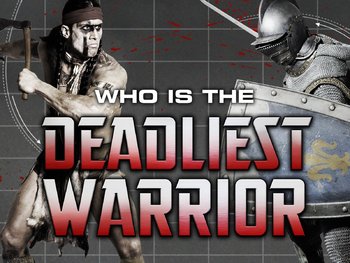 Who would win in a fight?

This is the most basic argument to rock message boards all across the internet, and rarely will you see an Off-Topic section on a website without this somewhere. Someone had the bright idea that this would make a good documentary — and it turns out they were right.

Much like the MythBusters (except drenched in gallons of blood), these guys approach age-old curiosities from the standpoint of the scientific method. Fighting styles are brought in, demonstrated, and boiled down into data. Weapons are examined by experts in very tightly-controlled tests. Descendants and masters argue their case about their strengths and decrying the others' weaknesses.

All of the data is then combined into one-thousand simulated fights (5,000 as of Season 3), and from there a single result is determined and recreated in a dramatic re-enacting. All of this can be seen Wednesdays at 10 PM EST on Spike TV, or on the internet at their official site under Full Episodes

, should you live in Canada and the USAnote or use a Proxy located in the USA.

Had a successful run, becoming the number 1 show on Spike after three seasons, though due to budget and production cost reasons a fourth season was not greenlit.

A video game has now been released, where players will be able to make their own fights between most of the Season 1 ancient warriors and a couple of Season 2's. A sequel has followed as well, with the various historical domain characters from the show being the playable warriors. Chivalry: Medieval Warfare has also announced an expansion to its game made with Deadliest Warrior

Plans for a movie based on the series have been announced

This show displays or discusses the following tropes: