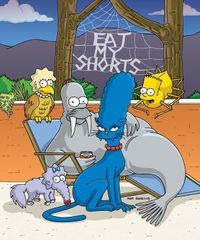 In this installment, Homer's new hammock makes clones of him, Springfield's new gun ban revives dead outlaws, and Dr. Hibbert invites the Simpsons to his island where everyone is a half-animal, half-human mutant.

This episode is notable for being the first Treehouse of Horror entry to actually be named as such; all previous entries were simply referred to as The Simpsons Halloween Special.

Send in the Clones

When Homer's hammock breaks, he buys a new one, disregarding the salesman's warning. It turns out that the hammock clones whoever jumps in it. The clones have diminished mental capacity (and no belly buttons), but with Homer that's not really very noticeable. Homer decides to send the clones to do his chores, like visiting Grandpa Simpson and shopping with Marge. However, when one of the clones decapitates Ned Flanders, Homer decides to abandon them. He takes them out to a cornfield and shoots any clone that admits to knowing the way back (several do, even after he's shot others who knew). He then abandons the hammock—in the same place he abandoned the clones.

The clones promptly use the hammock to make more of themselves, with some imperfect copies (and Peter Griffin). Homer's new Clone Army promptly eats through the cornfield it's in before heading to a brewery. They end up destroying every building in town except Moe's Tavern (which reports record business).

Back in the Simpsons' house, Homer denies knowing anything about the horde, despite Marge and Lisa's skepticism. Later the Simpsons attend a military meeting on what to do about the Homer clones. On hearing Homer's dramatic reaction to seeing that they're out of doughnuts, Lisa thinks of a way to get rid of the clones.

Later, military helicopters dangle gigantic doughnuts in front of the Homer clones (to the tune of Ride of the Valkyries). The clones immediately run after the doughnuts - and off a cliff. The clones are taken care of. Later, Marge snuggles with Homer in bed, but realizes that he doesn't have a belly button - he's a clone, and the real Homer was the first over the cliff. Marge is horrified, but calms down once the clone Homer offers her a backrub.

The Fright to Creep and Scare Harms

Bart and Lisa mourn Goldie the Goldfish at the cemetery. When they walk away from her grave, Lisa sees a grave for William H. Bonney, who was gunned down in 1881. His epitaph is 'I dream of a world without guns'. Lisa decides to make that dream come true, and campaigns to get rid of guns. She succeeds, and all of the inhabitants of Springfield hand over their guns in exchange for cash.

However, as Lisa and the crowd cheer for the achievement of her goal, William "Billy the Kid" Bonney and his outlaw cohorts (yeah, that epitaph was a little misleading) rise from their graves and terrorize the town. They force the Simpsons to put on a show for them at Moe's tavern, with Homer playing piano, Marge playing cello, and Bart and Lisa dancing. Homer is then pulled out by Professor Frink, who's invented something that could save everyone - a time machine. Homer must Set Right What Once Went Wrong. He grabs the time machine and activates it, sending himself to the past. Frink hopes that he doesn't mess up the space-time continuum too much, and then notices that he's got an egg whisk replacing his hand.

In the past, Homer tells the past Springfieldians to grab guns and follow him to the cemetery, where they shoot at the zombies' graves. When Lisa asks what he's doing, he explains that he needs to double-kill the corpses so they won't come back as zombies. Immediately afterwards, they do, but they then run away under the hail of gunfire. As the people of Springfield cheer upon defeating the zombies, a future Homer appears, from a future where gun violence has destroyed the earth. He's shot by Moe, who uses his time machine to go to the past for "caveman hookers".

The Island of Doctor Hibbert

The Simpsons go on vacation to the Island of Lost Souls. Bart wants to know why, and Homer asks "What could be more fun than an island shaped like a big smiley face?" The camera pans out to the island, and we see that it's actually shaped like a giant skull (the eye spaces are giant fires). The Simpsons' plane lands, and they are greeted by Dr. Hibbert. Marge is surprised to see him, as they'd heard that he'd gone mad. He says that yes, he's gone mad - about providing top-notch vacation values! He asks Willie, who's a hairy gorilla-like monster, to help them with their bags.

The family follows Willie through a tropical forest, while mysterious eyes watch them from the bushes. One set of eyes eats another. Marge hears the noise and tells Homer that someone's in trouble, but Homer brushes it off. Later that night, the family eats with Dr. Hibbert, and Marge compliments him on the resort he's running. She asks him to recommend activities. He recommends not asking questions. Lisa says that humans' inquisitive nature is what separates them from animals, and Hibbert goes off on a rant about why man has to be separated from animals. He then uncovers the turkey course - which looks suspiciously like Professor Frink.

When Marge and Homer are getting into bed, she tells him that something creepy is going on with the resort, and decides to do a little sleuthing. She gets out of bed and goes back outside, and discovers a building called the House of Pain. She is immediately captured by Dr. Hibbert, and later, a blue panther with her beehive hairdo pads into Homer's room. The panther scratches him awake. Homer doesn't notice that anything's off and pulls her in bed for "a little lovin'". She scratches him a lot, but he remains oblivious. The noise annoys Bart, who throws an oversized shoe at them.

Later, Homer praises Marge's prowess in bed, still not noticing that she's a panther (even when he talks about her tail). He only catches on when she leaps out of the house to catch a bird. He runs into the House of Pain and searches it for anything to change Marge back. He then finds Flanders, who's been turned into a cow-taur (a female cow-taur, at that). Ned asks Homer to milk him, and afterwards takes him through the forest, where they find a village of half-human half-animal monstrosities.

Homer is horrified that Hibbert has turned them into human guinea pigs, including Bart (spider), Maggie (anteater), and Lisa (owl). Homer makes a speech to inspire them to rebel, but before they can, Hibbert shows up with fox-Mr. Burns. He argues that they were better off now than before. Homer tries to argue that they're nuts. After all, all they can do now is eat, sleep, mate, and roll around in their own filth- actually, Homer thinks that sounds nice, and asks Hibbert to do it to him. He ends up turned into a walrus, and lives at the island with the rest of the half-animal creatures.

From high above, Kang and Kodos note that the island looks like their number 4. They then fly away, and the episode ends.