"The desert is a circle. To find them, we must travel in a spiral."
— El Topo, El Topo 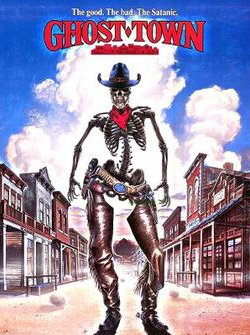 He's got a bone to pick with you.
Advertisement:

The West is, if you think about it, a logical choice for the Speculative Fiction treatment. The frontier as a whole was traditionally viewed (and still is viewed, to some extent) as the meeting place of civilization and the unknown. The lawless setting also meant plenty of violent deaths and unfinished business, fuel for ghostly tales. The Magical Native American also tends to show up here, for obvious reasons. Daylight Horror and Light Is Not Good are common elements in these tales: in a region where the dry season resembles the Thirsty Desert trope, it is shade that is sacred.

Weird West works often invoke horror tropes. Ghosts, zombies, vampires, and werewolves are common elements. Also expect to see some elements from Native American Mythology such as the skinwalker and wendigo (even though that second legend actually originated from the Great Lakes region). The West also has its own cryptids and urban legends, the most famous of them being the chupacabra and Area 51. It is not unknown for an ongoing Western series to have an episode or two of weirdness, even an ambiguous one.

Contrast Cattle Punk and Space Western, which take more of a scifi approach to the Old West, although there is, naturally, overlap.

The intro shows just as much as you'd expect from a western... with monsters.

Alternative Title(s): The Weird West, How The West Was Weird

The intro shows just as much as you'd expect from a western... with monsters.