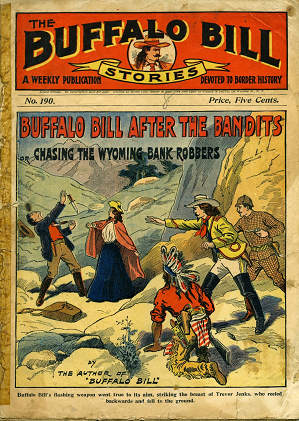 We're spoiled today. If you want entertainment, we got movies, video games, books, music, comics and many other things. You want a story, you have many choices.

People in the 19th century weren't so lucky. With entertainment being far more limited, you had to learn to enjoy what little you could get your hands on. Around the time of The American Civil War, literacy in the US began to increase considerably, and just around then, a new form of entertainment was invented. The dime novel.note The British equivalent of this at the time was known as the Penny Dreadful

, and sometimes dime novel stories saw a transatlantic adaptation in the UK.

Dime novels were basically books aimed primarily at immature adults but soon became popular with preteen and teenage boys, and they were largely pulp adventure fiction. Tough men going on exotic adventures around the world, fighting villains wherever they went - it was basically "turn off your brain" stuff, but provided the adrenaline rush and imagination boys wanted.

High-brow critics quickly derided the quality of the storytelling, and "dime novel" soon became a derogatory term for cheapnote Literally. A dime went a lot further back then, but adjusted for inflation it's still cheaper than most novels today, with 10 cents in 1865 being worth $1.72 in 2022. , sensationalistic stories in general.

Dime novels were highly sought after. In tough economic times, boys would sometimes get together with their friends to scrounge up enough money to be able to afford a dime to buy the novels, and then try to get as much enjoyment out of them as possible. Nowadays, a book that lasts just as long barely costs anything by our current standards, and if you enjoy reading, you probably own a lot of them anyway. But back then, any entertainment you could get your hands on was precious material, and dime novels fit a specific need.

The dime novel itself changed in format a number of times. The term referred not only to 10 cent books as described above, but both 15 cent books, and also to "story papers", a sort of newspaper-like format that contained multiple stories encompassing detective serials and globetrotting adventures. Due to changes in publishing, the price of these dropped to 5 cents, but the term "dime novel" remained in use.

Dime novels were hardly known for their characterization. Plot was king, and the whole point was to be exciting and entertain the newly literate audience.

Some of the most prominent Dime Novel characters were:

As time went on, the dime novel's niche was gradually superseded by the Pulp Magazine format.

The dime novel style of storytelling lives on even today. Cliffhanger movies tell essentially the same types of stories as dime novels, and the Indiana Jones and The Mummy movies are essentially the dime novel in big budget form. While our entertainment today is much more sophisticated, there's still a market for low-brow high adventure stories. Heck, even many of today's video games have roots in these.

These types of works tended to contain: