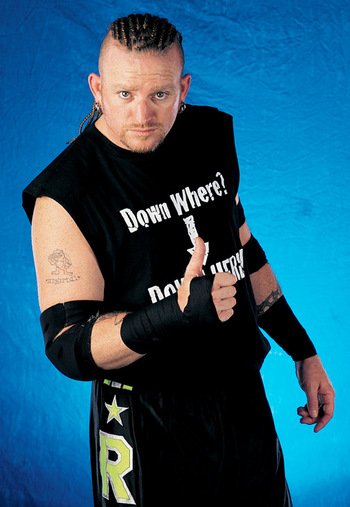 "You're damn right! It's me, it's me, it's that D-O-DOUBLE G!"
"TV Tropes, welcome to the Dogg House!"
Advertisement:

Brian Girard "B.G." James (born May 20, 1969) is an American professional wrestler born in Marietta, Georgia and resides in Jay, Florida who is best known for his work for his work in WWE as "Road Dogg" Jesse James or just Road Dogg. His career began in 1986 when he wrestled as Brian Armstrong in the indies, though he would alternate time spent wrestling with tours of duty in the United States Marine Corps. In 1994, he would make his then-WWF debut as a assistant to Jeff Jarrett named The Roadie. Their partnership lasted only a year before they both departed for the United States Wrestling Association. James returned to the WWF a year later under the ring name "The Real Double J" Jesse James, where he would play the role as a Jobber until he began a feud with fellow jobber Rockabilly, and they would eventually find true success by forming one of the most successful tag teams in WWE history, The New Age Outlaws. Together, the Outlaws won the WWF World Tag Team Titles 5 times, aligning themselves with and eventually joining D-Generation X. After the Outlaws split up due to Billy Gunn's injury, Jesse James briefly tagged with X-Pac, and later with K-Kwik, before being indefinitely suspended, and later released, by the WWF in 2001. Over the course of his first WWE run, he held the WWF Hardcore Championship

once and the WWF Intercontinental Championship

After spending more time in the indies, James debuted in TNA as B.G. James, forming the stable known as 3Live Kru alongside Konnan and Ron Killings (the former K-Kwik). He would later reunite with Billy Gunn (now Kip James) to form The James Gang, which would later be renamed Voodoo Kin Mafia. They would later split up, with Kip turning heel, and then James would be released from his TNA contract in 2009.

After spending more time in the Indies, James would return to the WWE in 2011 as an road agent. He would participate in the Royal Rumble in 2012, and then reunite with Billy Gunn to win their sixth WWE World Tag Team Championship. After they lost the title, James returned to his backstage role, eventually becoming the producer and head of the creative team for WWE SmackDown Live. He was released in the latest round of cuts at the start of 2022.

He was inducted into the WWE Hall of Fame in 2019 as part of D-Generation X's group induction.

These Tropes do it Doggy Style!