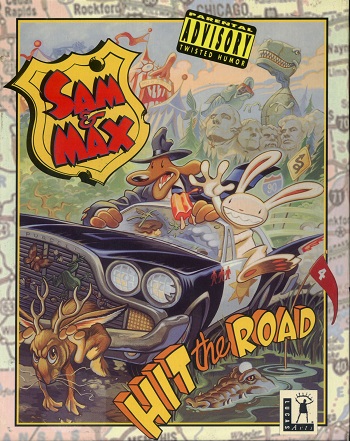 Bigfoot Chief: These two have shown themselves worthy of our gratitude and our trust.
Max: These are a naive people.
Advertisement:

Sam & Max were quite popular at LucasArts, and after getting cameos and Shout Outs in several LucasArts adventure games, the two got their own game in 1993: Sam & Max Hit the Road, which had the two traveling a pastiche of roadside America tracking down a Bigfoot that had escaped from a carnival sideshow with a giraffe-necked girl. It was done in the SCUMM engine, the same as other LucasArts classics such as Monkey Island.

The game is available on both GOG.com

. Both releases are DRM-free, pre-packaged and pre-configured to run under ScummVM, and come with digital PDF versions of the manual and hintbook. (You'll need to poke around the game's folder to find them in the Steam version.) Dummied Out content from the game can be found on