Complaining About Things You Haven't Paid For 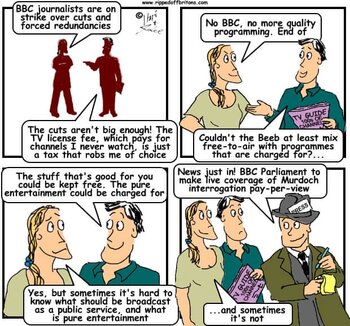 Hari and Jake try to make sense of what sustains a televised network. https://www.theguardian.com/money/cartoon/2011/jul/15/bbc-strikes-licence-fee

Max: My innocence has been shattered by this blatant tourist trap. I want my money back!
Sam: We didn't pay anything.
Max: Well, somebody better give me some money.
— Sam & Max Hit the Road
Advertisement:

They say that there's no such thing as a free lunch. No matter what, someone has got to pick up the tab.

However, sometimes a company or business decides to be a little generous with a promotional campaign and pay the costs to distribute samples or portions of their goods and services to the public at no cost to us consumers. Although such free samples are usually small, very minor things of cheap value to keep costs down for the party providing it, a free sample is still a tiny perk for the person receiving it and is always graciously accepted... or, at least, that's what the companies responsible for the campaigns would prefer, but that's usually not the case.

Complaining About Things You Haven't Paid For is a trope about a person or character who acquires something at no monetary cost to him/her (usually through a promotional giveaway but can also cover things like outright thievery) and doesn't like it and will likely demand compensation for not liking it.

This is commonly referred to with the saying, "Don't look a gift horse in the mouth."

Presumably a common habit of pessimists and picky people; in a stark contrast of this behavior, people or characters who have no problems looking on the bright side of things may frequently make a remark along the lines of, "Who cares if it's a piece of crap? It's free!" (or, depending on the circumstances, "It's stolen!")

This is of course Truth in Television. Just because you got something for free doesn't mean you have to like it. If anything, someone who did not pay for a product is much more likely to realize it's crap and throw it away, as they don't have to justify to themselves having wasted money. Those who believe in the concept that "time is money" may also be prone to this, if they believe their time has been wasted. Also, this doesn't apply when something free actually ends up causing harm through no fault of the receiver.

Compare You Get What You Pay For. When the thing was actually given as a personal gift rather than another form of freebie, see Gift-Giving Gaffe or My New Gift Is Lame.

Alternative Title(s): Looking A Gift Horse In The Mouth