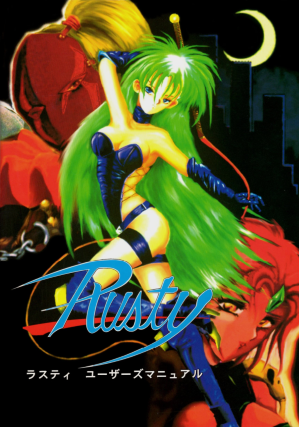 This tales places several hundreds years ago
in a time where demons and spirits provided the night...
A time when mankind still feared and loathed the dark...
Advertisement:

The story takes place centuries ago after Marquis de Monte-Carlo, a vampire lord who once ruled over Bloodthorne Castle and a remote European region, was sealed away by the efforts of a lone hero. However, after 300 years since Monte-Carlo was vanquished, this seal has weakened and monsters have returned, attacking villages once more. Many beautiful women also began disappearing from various villages throughout the frontier and were never seen or heard from again. As the ensuing chaos breaks out from the monster outbreak, rumors has began spreading that Monte-Carlo has returned. As one village finishes burying and mourning the deceased, a woman named Rustea "Rusty" Sprincul, a beautiful monster hunter who is feared among others, arrives at the scene. After hearing the plea of the village mayor to find the kidnapped women and the missing older sister of a young boy and girl of the village, Rusty sets out to rescue them in hopes they may be alive and put an end to the monster attacks. Opposing her are Queen Bloody Mary of Bloodthorne Castle, who wishes to use the women to resurrect Monte-Carlo (her master), and her mysterious masked hunter Gateau.

Rusty is a game heavily inspired by the classic 2D side-scrolling entries of the Castlevania series, namely Vampire Killer for the MSX, as the player explores the stages and find keys to open locked doors to advance through the area or uncover hidden secrets that may aid them along the way. The game also has some striking similarities to Castlevania: Rondo of Blood; both titles being released around the same year only months apart from each other, they're both set in a Gothic Horror setting, featuring a whip-cracking monster hunter out to stop an evil vampire lord terrorizing a countryside while rescuing many damsels in distress along the way.

The game is often regarded as a cult classic among Castlevania fans, often praised for its surprisingly high production values and complex level design. Unfortunately, since the game was released only in Japan and C-Lab has long since went defunct, the game became a rarity among other Japanese computer titles with people attempting to keep a copy available. However, an English fan-translation patch was released on May 9, 2017 by 46 OkuMen, a small translation team whom also worked on the fan-translation of E.V.O.: The Theory of Evolution for the PC-98. You can find the English patch for Rusty here

, and a trailer for the fan-translation can also be found viewed here